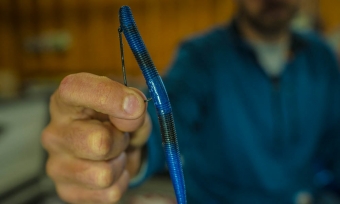 X Zone Elite Pro Brandon Lester recently fished the Bassmaster Eastern Open at Harris Chain and what he explains, it was fairly typical weather for Florida in late January.

“We had two different cold fronts hit during the week,” explains Lester.  “Which kept the water temp in the 58 - 60 degree range.  It made the fishing pretty tough, especially for shallow fish.  We had a lot of wind all week as well, which muddied up some areas.  Luckily it also cleared up others.”

January fishing in Florida generally means the fish will still be in their pre spawn staging patterns.

“For the most part all of the fish I feel like we’re still pre spawn,” says Lester.  “I knew going in there would be an offshore bite in the submerged hydrilla in 8-12 feet of water. With the water temps being that cool still I knew a lot of the fish would be out in the lake and not made the move to the bank yet. Although I knew that pattern would be a player I was determined to find a way to catch some closer to the bank and shallower than 6ft. I never have really dialled in that offshore hydrilla deal and I knew if I was going to do well I had to fish my strengths.”

Fishing to his strengths is something that Lester has always been known for.  Confidence is key to a tournament of this caliber, especially when it comes down to your equipment.

“To cover water and find fish I used a Spro Aruku Shad 75 lipless crankbait fished on a 7’2” med hvy MHX rod from Mudhole custom tackle. Once I got a couple bites in an area I slowed down and fished a lightweight Carolina rig with a 5/16th ounce weight, about an 18 inch leader, and an X Zone 5” True Center Stick in black/blue swirl. All of my big fish came on the Carolina rig. The big ones were not very active and I had to fish the bait super slow to get a bite. I fished the Carolina rig on a 7’2” hvy MHX Elite Pro series rod and 15lb Vicious fluorocarbon line.”

Preparing and pre-fishing for tournaments is something the world’s best anglers know all too well.  Understanding what is going on around them is a major factor to finishing well, or not.

“My first day of practice was on Sunday, 4 days prior to the first day of the tournament. After fishing shallow for a couple hours I saw several beds and caught a few small male bass. We were also really close to a full moon, so I knew that would bring some fish shallow, but the cold front kept them from actually spawning. I started looking for hydrilla and shell beds just on the outside of the places where I was seeing beds. I ended up finding one key stretch of bank, and particularly two shell beds both about the size of my boat where all my big fish came from. The big females were just staging on those little sweet spots waiting to move up and spawn.”

With each passing day on the water and each tournament fished, the lessons learned are priceless.  Lester explains a key to fishing Florida, which would also factor in across the country.

“I’ve learned that the best way to fish in Florida is to find an area, slow down, and fish it thoroughly. That’s exactly what I did last week so it gives me confidence knowing that despite a tough practice I still made it work by getting dialled in during the tournament. I think too many people get dialled into what is happening during practice and it blinds them to what is happening during the tournament.”

Lester next event is next week on the St. John’s River, out of Palatka, Florida for the first Elite Series event of the year.