On the water and behind the scenes at the recent FLW Tour Lake St. Clair 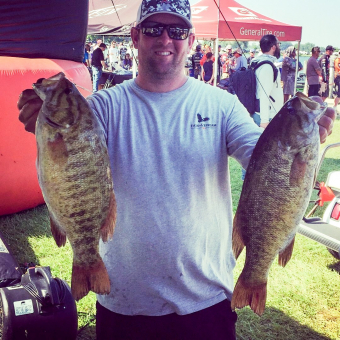 X Zone Lures gained popularity at the recent FLW Tour Lake St. Clair with it's great performing soft plastics both on and off the water.

Represented by Pro Staff Kyle Schuchard along with the Eastside Elite Michigan High School Team, X Zone Lures was both on the water and behind the scenes at the recent FLW Tour on Lake St. Clair.

Kyle Schuchard recently participated in his second event as a co-angler on FLW Tour, Lake St.Clair.  On Kyle's first day he fished the shoreline starting the morning with fan casting a 1/2oz white double willow leaf spinner bait with an Xzone 3.5” Swammer as a trailer and using a 7’0 rod with 10lb Vicious pro elite fluorocarbon.  Long casts and light line definitely gave me an edge on getting more bites. Continued to cull throughout the afternoon and went to the scales with a five fish limit weighing 13.00lbs.

On Day 2, he was paired with fishing Icon Peter Thliveros.   We fished an area in 15’ foot of water, clean clear and cooler temperature. Water coming directly from the St.clair river system. The area was a large sand hump, with grass edges with a slight rise on top. We cast a drop shot rig over the area working our baits to the grass edge. Using a spinning outfit spooled with 6lb Vicious pro elite fluorocarbon, Xzone slammer 309 hand-pour bait with a 3/16 weight gave us most of our bites!

The area was loaded with fish, 4lb plus! We packed up our gear and headed for check in at 3:18pm. Both with a 5 fish limit. At the scales Peter T gave credit to the days catch to my help using the Xzone slammer baits( I shared with my pro) We both weighed a 20lb even and I a 20lb 4oz bag of small mouth! What an incredible day two! After the weigh in was complete, my second day catch put me in 44th place overall with a two day total of 33lbs and 4oz! Was enough to get in the money, earning a $1000.00 payout!

Led by Brad Ballew, the team volunteered throughout the entire event at the weigh in to help the angler's with their fish and fish care.

The highlight of the team was being able to meet and work directly with Scott Martin who not only took time to speak to the team but took a photo and included them in his vlog.