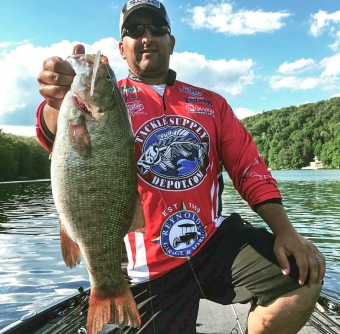 Chris works full time in the fishing industry through the Tackle Supply Depot and deals daily with everything that you would need for a day on the water fishing.

X Zone Lures is fortunate to have Chris on the Pro Staff team this season and he competes in the Milford Black Bass Club, through BASS Nation.

Chris started fishing when he was in high school along with his friends.  They shore fished at a local pond and he quickly got the buzz of bass fishing.

A year after school, he decided to enter into a tournament through a local club and became Angler of the Year.  He purchased his first bass boat to move from co-angler to angler and fished from his Skeeter FX 20, of which he has been sponsored through Skeeter.

After his move to angler, Chris finished off his first season in second place for Angler of the Year.  Throughout his fishing career, he has made 11 State teams, including the 2013 BASS Nation Eastern Divisional Connecticut Team and has won several opens and tournaments.

Chris prefers to fish with BASS Nation and has a goal of fishing in the Northern Bassmaster Opens one day.

Tackle Supply Depot is a preferred retailer for X Zone Lures and you can order at www.tacklesupplydepot.com


Watch the Pros at Work!