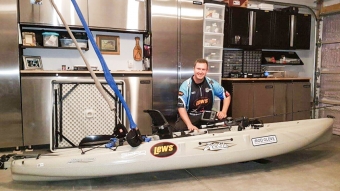 Kayak fishing is becoming an increasingly popular sport as it gives many anglers the opportunity to get into some pretty small spaces that boats are unable to maneuver.  X Zone Pro Staff Scott Boyer has made the investment this season to a Hobie Outback kayak and although he is a seasoned tournament angler, he is learning how to become a kayak angler.

While X Zone Pro Staff Scott Boyer waits for his fishing partner to heal from an injury, he has continued his passion for fishing by taking up kayak fishing.

Scott got into fishing from his Dad when he was just a kid and together they fished a great deal when he was growing up.  He got away from the sport for a number of years but made a return in 2000 when he met with Bob Izumi who took the time to talk about with him about the Pro/Am event and encouraged Scott to participate in the event.  Bob even got him talking to the Tournament Director and got Scott signed up for his first tournament with CSFL.

After having such a great time at this first tournament, Scott decided to become a BASS member and join a club to get more experience.  After a couple of years of being in the club fishing as a co-angler, Scott met his angler, Tim Birch and they have since become team mates. Together, they have participated in many CSFL tournaments as a team.

With Scott's team mate healing from an injury, Scott made a decision this year to get out on the water with a Hobie Outback double fin kayak.  He said he did a fair amount of research at the spring shows and decided on the Hobie brand. After learning how to roll his kayak, the hard way, he now knows what accessories need to be added in order to keep his gear dry and intact should he encounter such an event again on the water.  Outfitted with Lowrance, he peddles his way through narrow inlets that he could only dream before. He has been enjoying getting out on Pittock Conservation area and has been throwing the X Zone lures with great success.