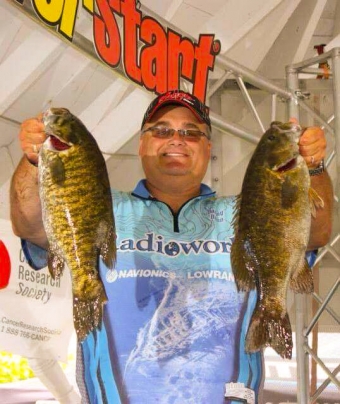 Danny Dunn has been fishing competitively for over 30 years and X Zone Lures is proud to have Danny as part of this year's team.  Danny explained that he started using X Zone Lures when he first met Mark Kulik, the original owner, creator and designer of X Zone Lures.  At that time there was no drop shot for the Great Lakes and Danny liked the look and performance of the hand poured lure.

With the new launch of the X Zone hand poured Lures owned by VRX Fishing, the quality of the lure is back to where it needs to be to meet Danny's requirements for fishing.

Danny started fishing as a young boy with the help of his Uncle that introduced him to the sport and taught him the basics and on weekends they would escape the city to fish in Midland. His passion for fishing continued into his teens and when he was able to drive, he would go up to Sparrow Lake and fish. Growing up there was not a lot of information to be found about fishing and the internet was not available, so he often resorted to reading books on fishing and watching episodes of Bob Izumi. He would then apply those very techniques and teach himself how to become a better angler.

Danny has advanced his knowledge over the years and has been known for winning tournaments through his knowledge of side imaging, and finding the right structure to capture the large mouth bass.

His biggest influence in fishing was Pat Maloney and in 1984, Danny competed with Pat in the OV Pro Bass tournament winning 5th place and was exposed to a whole new group of individuals involved in the fishing industry. Danny enjoyed the competitive edge to fishing as he had enjoyed a semi-pro career in both hockey and football, so competing in sport fishing was just combining his two passions.

As a global sales manager for a large corporation, Danny travels the world constantly but still finds time in his schedule for multiple tournaments throughout the season, both club tournaments with the Port Perry Bassmasters as well as the CSFL tournament series.  Danny even finds the time to participate in charity events throughout the year.

With many top 10 finishes in his career, his most memorable tournament has been the CSFL Pro/Am event on Lake Simcoe where he had a high finish in 2014. He has competed in Bass/Walleye Tournaments since 1980's and won multiple Top 10 finishes in Ontario’s top tournament series, including Bassmania/Chevy Mercury/ProBass/CFT/Top Bass.

Danny's advice to young anglers is to listen and learn.  He says that he finds there is too much talking and not enough listening and that there are some great people in the fishing industry that can provide valuable knowledge for free.  He also has found that "slow and steady" always takes the lead at the weigh-ins.