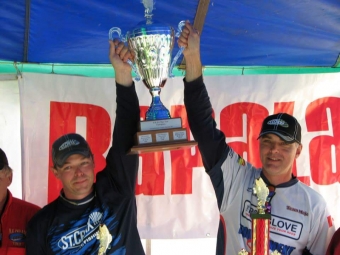 While many of us wait patiently for bass season to open in all zones here in the Northern hemisphere, Jeff Rathburn has been fishing for them since May 1. The season in New Brunswick and Maine, USA starts on May 1 and anglers raise to find the big ones before the season shuts down on May long weekend until July 1 in order to allow the bass a chance to spawn.

Jeff Rathburn was Team of the Year in 2013, fishing the NB Bass Pro Tour and he credits his success to the hand poured X Zone Lures.

Jeff started fishing as his Dad inspired him and took him fishing on weekend visits.  The camp was in Lake Utopia, NB and each weekend he would head out with his Dad in the family's 12' Aluminum boat.  Growing up in South New Brunswick, Jeff fished lots of chain pickerel, a cousin to the pike species, and he taught himself techniques, learnt from TV shows and then took his skills out on the water.

He has been fishing in tournaments in New Brunswick since 2006 as he found his passion was with bass fishing and the excitement of the fight.  Prior to the NB Bass Pro Tour, he started making the trip to Maine in search of large mouth bass.  He joined the Maine Blade Runners and started competing in their tournament series.  The fish can be found in grasses in Maine, whereas only small mouth bass can be caught in New Brunswick.

Lake Utopia in the southwest region of New Brunswick is probably the most feared lake among tournament anglers in NB as it has a bad habit of producing big fish during non tournament and pre-fishing days but come tournament days it seems to keep her best in the lake but Jeff has been successful in many tournaments here taking to the stage with both big fish and the most weight.  Jeff and his partner participate in a team effort on the NB Bass Pro Tour and have been successful in this tournament trail, becoming the Team of the Year in 2013 and winning many other top standings in years since.

In Maine, he is able to make many different presentations and has taken his X Zone lures with him to catch the big ones. While fishing for large mouth bass in Maine, he uses the Slammer but rigs it on a jig for a vertical presentation as he fishes the grasses.  Although it sounds like he may travel a long distance to compete for large mouth bass, the lakes are anywhere from 1/2 to 1 hour drive from his home.  As he says "its worth the drive".